They are tales of shape shifting, of the desire to shed one skin and step into another. Less frequently dissected, though, is how often people turn to running as a salve for grief, to impose order on chaos. All I wanted to do was run away from my life. What Menzies-Pike only obliquely alludes to, but what many runners have likely found, is that running can be a relatively healthy and culturally sanctioned form of self-harm.

But endurance can help turn elusive sorrows into something tangible, like aching muscles and blisters. Such pain can be easily described. How many women have turned to running to obliterate the shadow of something else? Instead, parallel narrative arcs mold the segments forcibly into a memoir's structure. One arc follows his training for the New York City Marathon; the other his life story from the decision to become a writer to present day. After a regimen of yearly marathons and triathlons with a mile ultramarathon thrown in for good measure, Murakami finds his times suffering while his training regimens remain the same.

Could be that he was 57 years old, but our hero is not going down without a fight. Is this what a three-quarter-life crisis looks like? Ultimately Murakami reveals himself to be a skinny Howard Roark, inspired to do what he does and refusing to alter his trajectory or apologize for it.

And like Roark, this makes him a noble and rugged individualist worthy of admiration and, at times, an interminable tool. A man who decides he can write a novel on a whim and goes on to produce award-winning literature gets points for gumption, but when he talks about being able to take daily power naps and train for hours a day, every seeming complaint about his life's direction makes him less likable.

One hopes to take from a memoir something he can apply to his own life: an adage, a better understanding of self, something. Instead you're left with some less than inspiring thoughts on running and a hole where the author's motives should be. In the end you have a project by Murakami, about Murakami, and, ultimately, for Murakami. Usually I leave the personal angle to my blog posts, but the fact that this book dug me out of a runner's hiatus is worthy of mention.

What I Think About may be an underwhelming read, but here are some examples of Murakami's bull's-eye observations:.

Elsner on May 25, Like the author, I am both a novelist and a runner -- but he's far better at both than I will ever be. Murakami has run more than 30 marathons -- me just one. He's written numerous novels -- me just three and two of those still to be published.

So it was with great anticipation that I began this book. I found it clearly written and engaging but disappointingly slight -- the kind of book an author writes to make a few extra bucks when he's become well-known and successful enough to sell just about anything on the strength of his past record and reputation.

There are a few nice observations about life and running and the connection between them and some mild philosophizing on encroaching old age and how to approach it. But in general, I had the sense that the author was as much hiding his true self as revealing it. His description of writing his first novel is fairly typical.

He's watching a baseball game he gives the exact date and it's the top of the second inning and someone gets a hit and at that precise moment, Murakami decides it would be fun to write a novel. A few months later, it's written; a few months after that, it's won a prize. Just like that, easy as pie. Running is much the same. Occasionally there's some pain but mostly it comes easy, mile after mile after mile. He gives his muscles their marching orders and usually they obey. A couple of times, there are relative failures in running but not in writing and the legs seize up.

But in general, no challenge is too great that it cannot be overcome. As the book wore on, my general envy passed. One can't be jealous of Superman. At the end, I found myself regarding Murakami, not as a fellow runner and writer, but more of a phenomenon whose brain and body are constructed of different materials from mine. And I found myself, while admiring him, also somehow disbelieving him.

By Christian Kober on Mar 16, If Murakami had never written another novel after writing 'Norwegian Wood' he would have been a great writer Alas he did. Not that his other novels are bad as such.

Some are even good. Others are mediocre. And his most recent novels seem to have been copies of other novels he wrote before. And as if he realized by himself that his recent novels are all much too similar to each other he has started to write semi autobiographical books, about the poison gas attack on the Tokyo subway or, now, about running. These are not badly written, after all he is a good writer and a perceptive man.


But much is missing. I had been looking forward, as an avid runner myself, to read the reflections of someone more perceptive than me, someone who might have another take on running than myself. Instead, I found a mixture of semi-baked philosophical thought and cliche observations. Yes, it sometimes rains when you run.

And, yes, running a Marathon requires some self discipline. And, yes, stretching helps. And Mizuno shoes are good running shoes The book is a quick and nice read and I cannot claim that I disliked reading it. But afterwards there was nothing left. Popcorn for the mind. By Gerald Brennan on Apr 13, I hate to say it, but this is probably the worst thing I've read by Murakami. On paper--or rather, on the back of the paperback--it sounded like a sure thing; I'm a writer, and I've got a few marathons under my belt, and I was spellbound by the three other books I've read of his. And by and large, I felt a rush of excitement in the early chapters, a sensation not unlike the fresh lively feeling one gets at the start of a marathon, when the exhilaration far outweighs the effort that's been expended.

It's fascinating, for instance, to read that he'd been the owner of a small jazz nightclub and hadn't had any particular ambitions to be a writer until he was in his 30s. I couldn't identify with that, but I could relate to his persistent attitude about writing. There's a romanticized notion of writers living the bad life, drinking and smoking and doing their best to churn out a great manuscript or two before their hard living catches up with them.

I've lived that life, but in my experience it doesn't necessarily make one a better writer, unless one's writing about what it feels like to drink and smoke, and that eventually makes for boring reading. This "But-Hemingway-did-it! Anyway, I digress. It turns out that the lessons of physical fitness--persistence, mental toughness, goal-setting--can be far more useful and applicable to writing, a lesson Murakami and I have both apparently learned.

But those insights are, by and large, done by the midway point, and what remains is a long and boring slog.

I've heard that a writer should never confuse how they feel about a story with how good the story actually is, and Murakami would have done well to heed this advice; his training efforts and race times were obviously near and dear and dear to his heart, but they make for rather unexciting reading. Also, his observations and analyses often come off as flat and uninspired; as an author, he's great at conjuring up memorably fantastic scenarios that still seem real, characters that feel full, and plots that work like a Swiss watch, but without the ability to make things up and take them in unexpected directions, he's reduced to stating banalities like "Nobody's going to win all the time.

On the highway of life you can't always be in the fast lane.

Murakami's enough of an established author that he could probably print out, say, every email he's sent in the last ten years, staple them together and call them a book, and sell a kajillion copies, whereas some of us are still toiling away in obscurity, unable to sell manuscripts over which we've slaved for years. But it seems even Murakami has the sense that this is a substandard work. 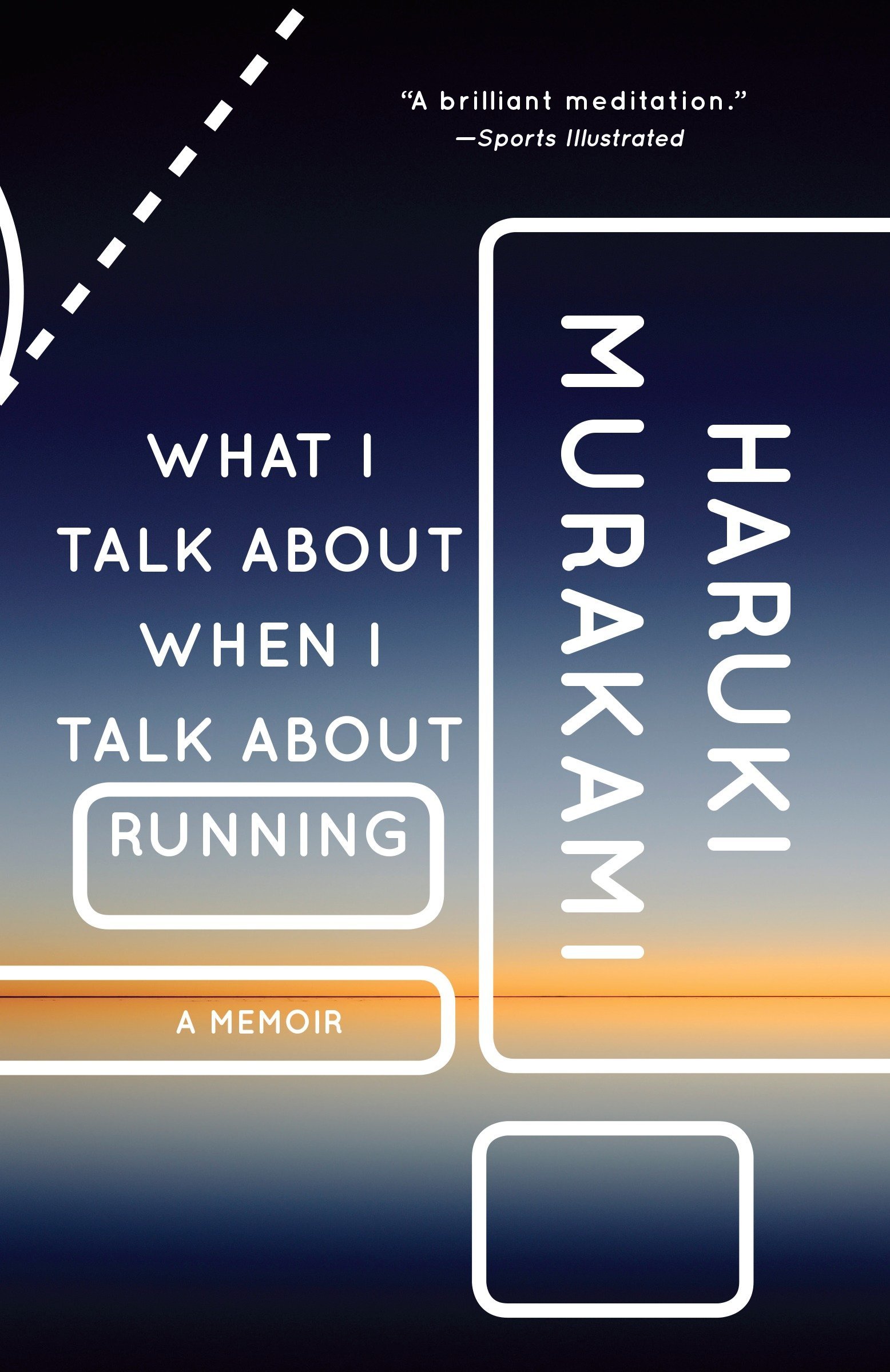 Like a jogger slogging towards the finish line, one ends up thinking about just getting the damn thing done with and resting for a while. In lieu of this, I'd suggest getting Ann Lamott's "Bird by Bird," which doesn't have any fitness tips but is perhaps the best book I've ever read about writing.

But if your desire to read is as automatic as Murakami's desire to run, you may end up picking this up anyway. And if you're anything like me you may end up turning the final page wearily, muttering the tired marathoner's frequent post-race lament: "Never again. By Sabina Zawadzka on Dec 28, As an avid runner, I was excited to start reading this memoir.


However, the content did not live up to my expectations. For a title with running at its epicenter, this memoir spoke plenty about the credentials one must possess to be a successful writer.